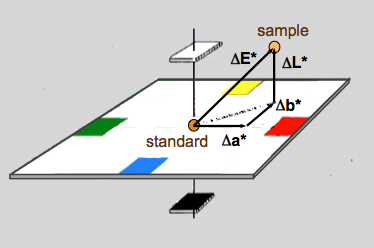 An example showing the ∆E for the L*a*b* color system.
Photo courtesy of BYK-Gardner.

A well-known, if extremely rough, convention in the world of color measurement says that in CIEL*a*b* or CIEL*C*h space, a dE* value of less than one indicates that two colors are visually indistinguishable to the human eye. The reality is far more complex than this. The limits of visual perception actually differ depending upon which portion of color space is being discussed.

When the L*a*b* system was invented by the CIE committee in 1976 it was touted as a “uniform color space,” but it might be more accurate to say that it is “as uniform as practicality allows.” A uniform color space is one in which the visually perceived magnitude of a color difference has the same dE* value no matter the location in CIEL*a*b* or CIEL*C*H* space. We can see from the following graphic that this is not exactly true for this space. 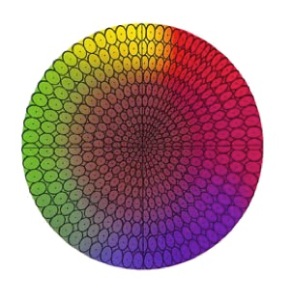 All the colors in the ellipse are perceived to be the same color by our eye.
Photo Courtesy of BYK-Gardner.

The graphic to the left shows elliptical tolerances in CIEL*a*b*/L*C*h space. Any two points inside a single ellipse are considered colors that are indistinguishable to the human eye. Note that the size of these ellipses varies in different locations. This tells us that our eyes are better at distinguishing differences in some colors than others. The red portion of the graph has the smallest ellipses, which indicates that our eyes are good at picking out small differences in red colors. The green portion of the graph has the largest ellipses, which indicates that our eyes are not as sensitive to small changes in green colors. When it comes to color control of a product, this means larger tolerances for green colors are acceptable, while red colors require smaller tolerances in order to keep them visually uniform.

The second major point to note about this graphic is that the ellipses are longer in the chroma direction and narrower in the hue direction. This means that changes in chroma are more difficult for the naked eye to distinguish than changes in hue.

How can this knowledge be put to use when deciding color tolerances for a product? It’s important to decide not only how large a tolerance should be, but which parameters to control to get the most effective tolerances. If we control the L*, a*, and b* values individually, we get what are called “box tolerances”, as such tolerances appear as rectangular boxes when mapped in color space. If the tolerance is based on the dE* value only, it is what’s called a “spherical” tolerance, as it appears as a sphere when mapped in 3-D color space. When tolerances are based on L*, C*, and h values we get elliptical tolerances, and by setting the tolerance for the C* value larger than that for the h value we get elliptical tolerances. 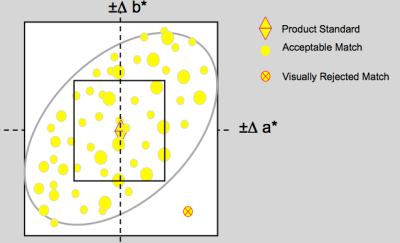 An example of box and elliptical tolerances compared to acceptable visual matches. Photo Courtesy of BYK-Gardner.

Setting tolerances for color control can be tricky business. Setting tolerances too tight can cause too much product to be rejected. Setting them too loose can lead to a product that does not look uniform, or could be rejected by a customer for not being close enough to their specifications. By understanding the color space they are working in and the implications of the tolerances they define, companies can determine for their individual products how to best save money while at the same time producing a consistent look.